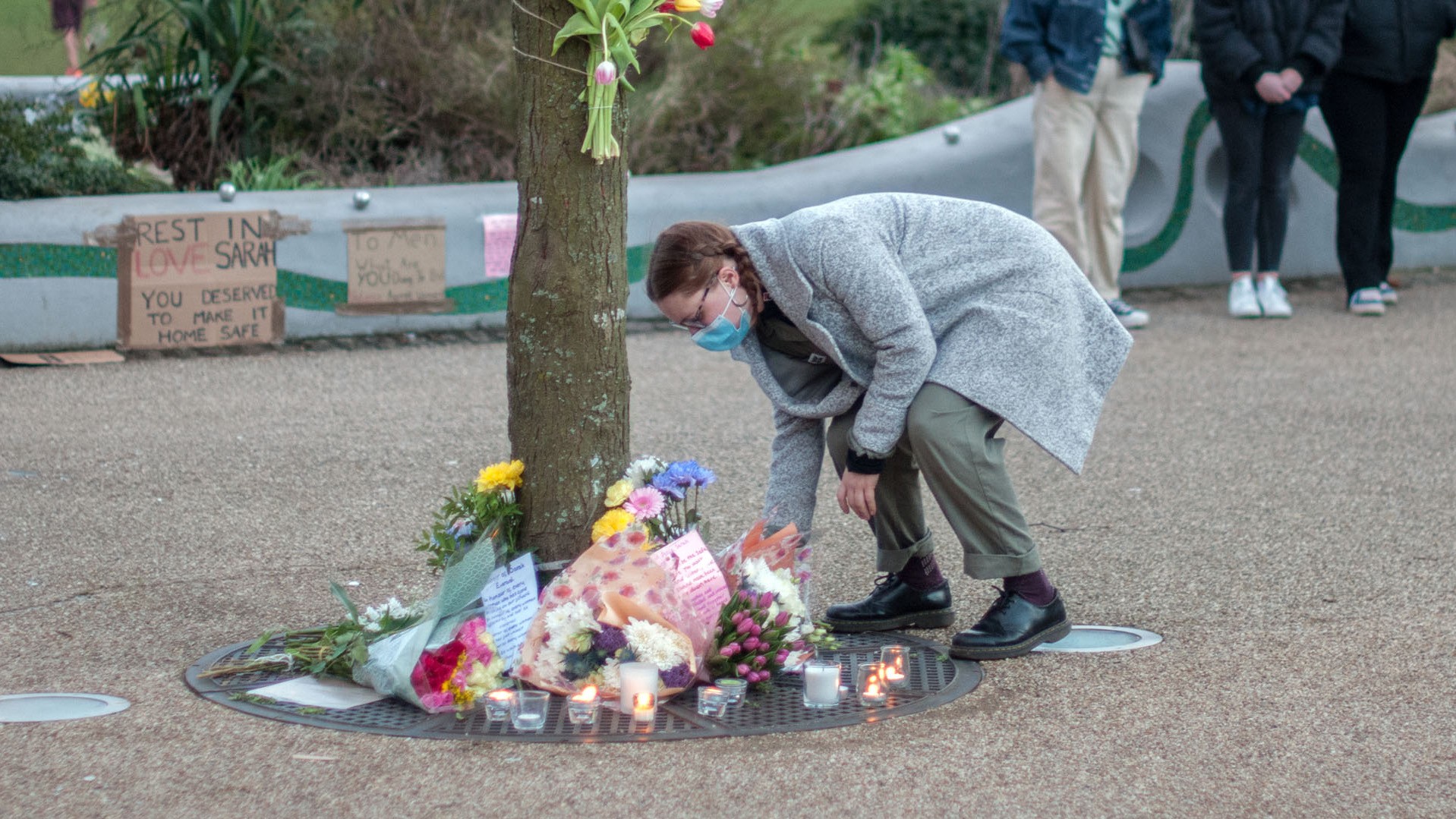 Clapham Common: Our Right to Protest is Under Attack

Don’t be fooled into thinking that the police’s use of force on Saturday 13 March was for the benefit of public health.

The irony of a Government that has consistently failed to give a shit about controlling the virus, now using Covid-19 as an excuse for the excessive and unwarranted force used by the Metropolitan Police at the vigil of Sarah Everard, is appalling. In the same week as they re-opened schools during the midst of the biggest wave of coronavirus we’ve experienced yet.

Sarah Everard was abducted on 3 March 2021 in Clapham Common, whilst walking home alone at night. Serving Metropolitan Police officer, PC Wayne Couzens, has been charged with her chilling murder. Read Alice Wilson’s article about the abduction and murder of Sarah Everard here to read more.

A vigil was held to #ReclaimtheStreets on 13 March 2021, in memory of and mourning for Sarah. A peaceful vigil, comprised mainly of women, to pay their respects in the place where Sarah was last seen. But the Metropolitan Police didn’t treat it like that. As darkness fell, disgraceful scenes of police brutality were broadcast on Saturday night, where women were being detained, kettled, arrested and physically assaulted by police officers. I sat watching the news, feeling frightened.

Frightened for those women, frightened for my own rights, frightened about the direction that the UK is going. If police can instigate violence at a peaceful vigil in mourning of a woman allegedly murdered by a policeman, what can’t they open violence on?

Totalitarian resistance to women’s rights and feelings is evident. The vigil in Clapham Common was a peaceful one, with organisers promising to maintain social distancing at all times. The Metropolitan Police’s initial response to Sarah Everard’s disappearance was telling women in Clapham to ‘go careful and not go out alone’. There was no comparative advice issued from the state for men to stay at home.

A woman was shunned by police when she reported being flashed by a man at the vigil of Sarah Everard. Apparently they were too busy to respond. Think about that.

Patsy Stevenson was arrested at the square, which was ‘not massively packed’, and she remembers being terrified as police officers were manhandling women, pulling her arm and having their arms round the neck of a woman next to her. At a vigil against male violence.

In her public statement on the actions of the police at Clapham Common, Metropolitan Police Commissioner, Cressida Dick, stated that she “fully understands the strength of feeling” and that “as a woman…. [she] understands why so many people wanted to come and pay their respects and make a statement.” But the tipping point was when “a really big crowd gathered with lots of speeches”, apparently turning it into an unlawful gathering given the current Coronavirus restrictions – “causing a really serious risk to people’s health.” So officers, who described the mourning crowd as “hostile”, told them to disperse.

A statement from Assistant Commissioner Helen Ball has also been released, stating that the enforcement action was necessary because of the “overriding need to protect people’s safety.”

Against the backdrop of a pandemic in the UK, at first glance we could argue that a vigil of a large crowd should not go ahead. But if we look at the facts, it’s clear that Covid-19 is being used as a weapon to forcibly silence the voices of those showing criticism towards the system. This excludes the anti-lockdown protests that have been met with arrests, given that they have been inherently dangerous – with no social distancing or mask wearing.

Covid-19 as a Global Threat to the Right to Protest

The UN issued a statement in April 2020 warning Governments worldwide to not use the pandemic as a method to infringe on the human right to peaceful assembly. Covid-19 is being used as a weapon for the benefits of Government to avoid public scrutiny of their actions. Examples include Zimbabwe, Israel and Peru.

You might see those countries' names and think how far removed we are from that kind of governance, but we’re not. Priti Patel has been on a mission to limit the right to protest since she was brought in as Home Secretary in 2019.

Take the Extinction Rebellion protests of 2019 that brought London to a standstill in the name of fighting for climate justice. The High Court ruled the actions of the Metropolitan Police against protestors as unlawful. Nevertheless, Extinction Rebellion, an intrinsically non-violent direct action pressure group, was listed as a 'key threat' by counter-terror police, which Priti Patel vocally defended.

Patel also slated the Black Lives Matter protests in the summer of 2020, calling them “dreadful” and that she would not take the knee. She insists that there are better ways to stand up to racism.

In an interview about BLM, Patel slipped up when she couldn’t quite manage to hide her contempt for protests: “We saw policing coming under a great deal of pressure from some of the protests. I don’t support protest and I also did not support the protests that were associated…”. She backtracked when interrogated by her interviewer, but I know she meant every word.

The state picks and chooses when it uses Covid-19 as a weapon to limit our right to gather in crowds.

As the UK celebrated the 75th anniversary of VE Day on 4 May 2020, the BBC showed crowds of street parties gathering to revel in patriotism. Apparently social distancing isn’t necessary when it’s a nationalism party for Brits.

As unmasked football fans across the UK gathered in mass crowds to celebrate Liverpool winning the Premier League or Leeds United winning the Championship, the police managed to control their desire to use force to disperse the rowdy, not socially distanced crowds.

Yet, when it’s a gathering in support of Black Lives Matter or a peaceful vigil for an abducted and murdered woman, suddenly the risk of spreading coronavirus becomes poignant. Unlike the Extinction Rebellion protests, the authorities are able to fall back on lockdown as their legal basis.

We’re not stupid, we can see what’s going on.

If the police were really trying to control the virus on Saturday night, why were they using kettling techniques on protestors, forcing them into small confined spaces with others? If the Government really gave a shit about controlling the virus, they wouldn’t have consistently failed to act regarding restrictions, or founded the Eat Out to Help Out scheme, or forced workers back into their offices too soon.

This Government is authoritarian. This Government is dangerous. The incremental robbery of our human right to protest only means that they will be able to implement further restrictive laws, bit by bit, hoping that we sit back and watch it from the “safety” of our Covid-free homes. Suddenly, once we’re out and about again, we’ll realise just how much of our freedom has been snatched from us.

The Police, Crime, Sentencing and Courts Bill 2021 is being voted on in Parliament on 16 March 2021. If passed, draconian laws regarding police powers against protests will mean that the Home Secretary has the ultimate power to decide whether a protest is legal or not. And the scope is extreme – up to 10 years in prison could be faced for ‘causing serious annoyance’. Does anyone even know what that means? Well we won't have to, because it’s up to Priti Patel to decide.

Even Theresa May is criticising the bill for being too authoritarian. If that doesn’t tell you everything that you need to know, nothing will.

Write to your MP, attend a protest if it’s nearby, share your anger online and sign these petitions:

Friends of the Earth

With a Conservative majority in Parliament and no European Convention of Human Rights to fall back on, our liberty is under serious threat.

Meet the Leeds students who have created a drink spiking database